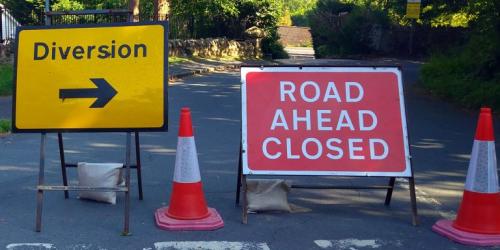 LANCASHIRE COUNTY COUNCIL
(LANCASTER ROAD, POINTER FARM, PREESALL & SANDY LANE, PREESALL, WYRE BOROUGH)
(TEMPORARY PROHIBITION OF THROUGH TRAFFIC) ORDER 2021
NOTICE IS HEREBY GIVEN that Lancashire County Council intends to make an Order under Section 14(1) (a) of the Road Traffic Regulation Act 1984, as amended, the effect of which will be to temporarily prohibit traffic on the roads set out in this notice.
1. No person shall cause any motor vehicle to proceed over the following lengths of highway in the Borough of Wyre:
i. Lancaster Road, Pointer Farm, Preesall from its junction with Cart Gate to a point approximately 60m east of 'The Beeches.'
ii. Sandy Lane, Preesall from its junction with Fordstone Avenue to 'Willow House.'
2. Nothing in this Order shall apply to persons engaged in the carrying out of the works.
3. The prohibitions will be operative daily from 0900 hours to 1600 hours on Friday 4th February 2022 until Friday 18th February 2022 or until completion of the works within this period.
4. An alternative route for vehicular traffic affected by the closure is via:
Lancaster Road: Burned House Lane – Park Lane – Sandy Lane
Sandy Lane: Park Lane – Burned House Lane – Lancaster Road
The temporary prohibition is necessary to allow carriageway resurfacing works to be carried out by LCC Highways.
[Ref: HRiT/32973/BJN]