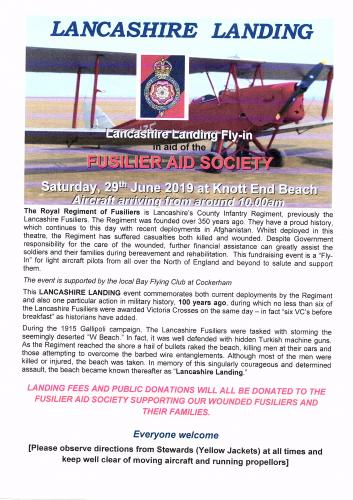 An update from the organisers of the 4 September 2021 event:

The Lancashire Landing went ahead last Saturday despite the less than perfect weather and although it started very quietly it picked up through the day and finished as quite a success.

Chester Potts, retired Major, Royal Regiment of Fusiliers, was unable to fly in with his serving Fusilier passenger, despite two attempts, because of thick cloud over the Pennines, but 27 aircraft arrived from most other parts of the country, Scotland, Wales, East Anglia and the Midlands as well as several from local airfields. Less than we have had some years but not at all bad in the circumstances.

We had lots of very positive comments from pilots and passengers about the landing site itself and about the town to which they all repaired for lunch.

There were also a lot of local people and those on holiday in the area and they certainly seemed to appreciate looking over the aircraft, chatting to the crews and generally enjoying the atmosphere of the day. Many people were interested in the history of the event and the special military action after which it is named.

Later in the day we had a brief visit from County Councillor John Shedwick who was particularly appreciative of the efforts to raise money for the Fusiliers Aid Society.

The donations made by pilots flying in as well as members of the public attending came to a total of £468.49 all of which will be passed to the Society.

A local photographer from Poulton took many photographs during the day and these can be seen on the link below.

I have also attached a photo of Sanjay who was our furthest travelling visitor (approx. 230 miles) in his Cessna 177B – he particularly enjoyed the event and can’t wait to come back.

So we look forward to next years event, hopefully in the Spring and maybe others too.